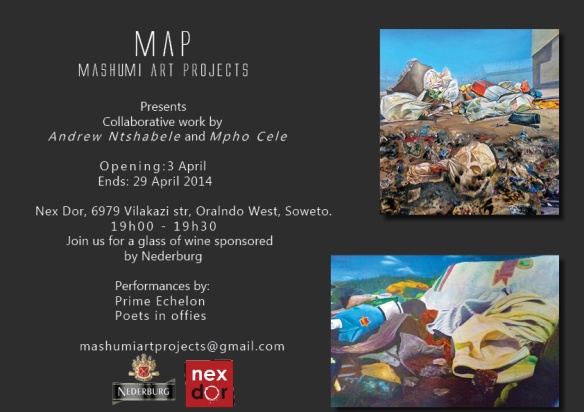 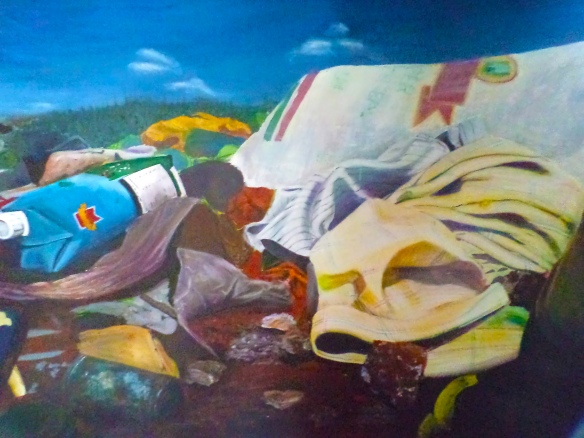 This body of work acts as a simile which expresses the sociological and socio-economic structures of the lower class communities. Hence I have painted these waste materials in a landscape composition or rather as landscapes, to juxtapose the peoples living conditions with rubbish. The Waste material is symbolic to how fragile, unstable and unhygienic these living conditions are to the lower class. My works also aims at emphasizing the notion of using something and then throw it away after using it, as this is a trend amongst our political leaders who use people to vote for them and afterwards forget about them. These works also aim to illustrate the absence of change in lower class societies and the abandonment of the lower class people. 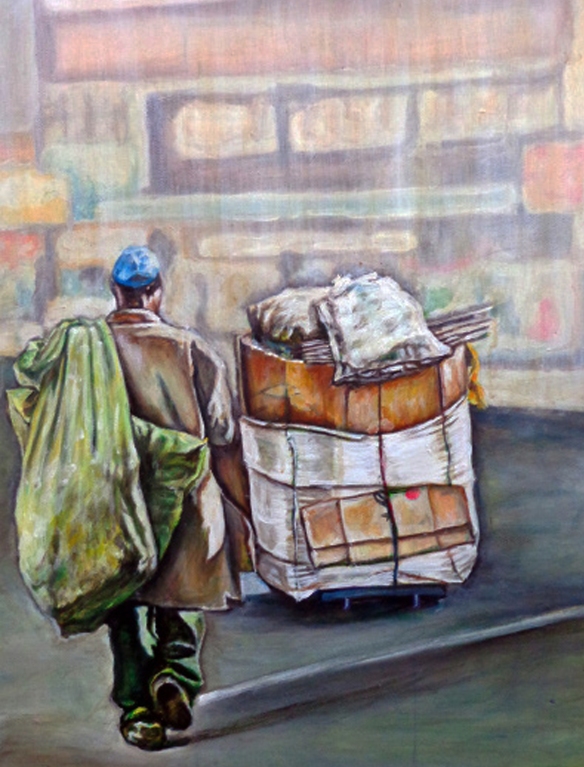 Andrew was born in the small rural town of Moruleng in the North West province of South Africa. In his formative years his family moved to the city of Johannesburg amongst the hustle and bustle of the urban life, where he currently resides.

His passion and love for the visual arts was identified by his teachers through nursery school right up to High school. This led him to enrol at the University of Johannesburg, which enhanced his knowledge in the world of visual arts and enriching his opportunities. His education at art school has Moulded Andrew into a well-rounded visual artist and youth.

My work focuses on urbanisation in Johannesburg. My interest in the city of Johannesburg developed out of the fact that it is the city that I have grown up in since the age of four. I have had the pleasure of witnessing South Africa’s first democratic votes in 1994, and seeing Johannesburg’s transformation from the early nineties, mid-nineties to the present. I still live in Johannesburg and am confronted by poverty, pollution, and urban decay every day of my life. I have seen the effects that

urbanisation has had on the city of Johannesburg in relation to its physical change, socio-economic and political change post-apartheid. My areas of interest are the people who live in the inner city and the environment within the inner city.

My work deals with the negative effects of rapid urbanisation in Johannesburg and the pressures and the strains of the people I encounter and interact with on a daily basis as we go about our business. Based on my encounters with these people I felt the need to investigate the social predicament of my city and understand the root causes of the current inner city decay.

My work is a form of social commentary and deals with the socio-economic challenges that the majority of black South Africans face in post-colonial South Africa. My focal subject matter is rapid urbanisation in the inner city of Johannesburg and the pollution and rubbish among which the inner city residents live. My paintings incorporate more than one medium as they are a fusion of collage and acrylic paint. My works are produced from actual photographs that I take on my daily travels around the inner city of Johannesburg and its outskirts.

Ever wonder what a local comic book superhero would look like? What sort of mischief he’d get upto after discovering his new talents… The villains, sidekicks and not forgetting the damsels who’s acquaintance he makes along the way to becoming a well known hero. Oh, what awesome super powers he’ll have? …well don’t look any further!

Loyiso Mkize, a Cape Town based artist and co illustrator of the hip SUPA STRIKAS comic book and animation series on DSTV’S Disney Channel, launches his independent project under the ‘LOYISOMKIZEART’  flagship. At a previous design share party, Loyiso described KWEZI as the manifestation of a life long dream to create a simple enough character to identify with every African on the continent. 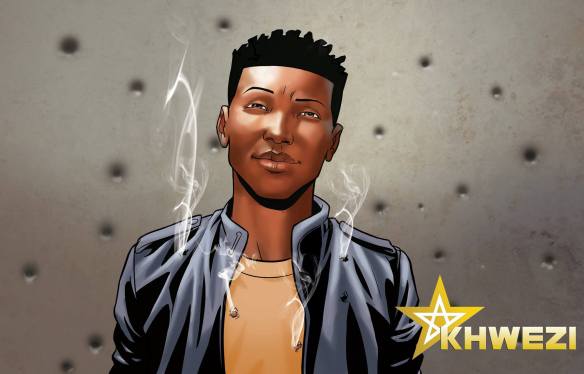 “Set on a contemporary South African backdrop, Kwezi a 19 year old boy that discovers he has superpowers, and so the journey towards his purpose begins…” An exciting intro into our own new local comic book superhero.

Loyiso Mkize was born in 1987 in Butterworth in the Eastern Cape but studied in Cape Town where he completed a Diploma in Graphic Design at CPUT. Loyiso exhibited his body of work from “REFLECTIONS ETERNAL” at the Bombay Sapphire Imagination Room in Rockville, Soweto last November, a show curated by Mashumi Art Projects and more recently at a New York showcase with several other talented South African artists.

Tonight his first independent comic book officially launches online. The first issue will be downloadable for free. Stay tuned for more updates. The link will be available on the Mashumi Art Projects facebook page in a few hours. https://www.facebook.com/MashumiArtProjects